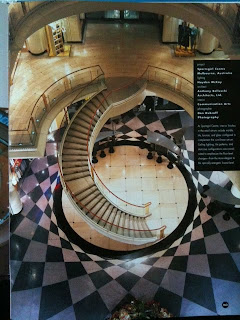 -Great lighting, nice range of midtones as well as shadows and highlights

-Heavy geometric aspects, the checkered pattern breaks the space and the arc of the railing provides a half-frame, circle in center creates a bull’s-eye effect

-Plays with pattern, although primarily checkered they are of differing sizes and arrangements

This image was taken from a lighting book, so naturally the lighting of the image was the primary focus. However, you can see the artist’s touch in the way he chose to compose the image. The angle he chose to take this from creates an Alice in Wonderland feel- the “tumbling down the rabbit hole” effect. The checkered ground is extremely disorienting due to the play of perspective and how it appears to create a funnel. This was the tiling choice for the space, but if shot dead on I doubt the effect would be as great. This is really emphasized by the bull’s-eye in the center, which the spiral staircase leads the eye into. The angle, again, emphasizes and exaggerates the funnel feeling with the positioning of the staircase and the tilt angle of the camera. I also like the framing the arches from the upper two floors create. It is a nice separation from a believable perspective into the less plausible lower level. Lastly, the few bursts of color in the image help add interest without taking away from or overpowering the image. 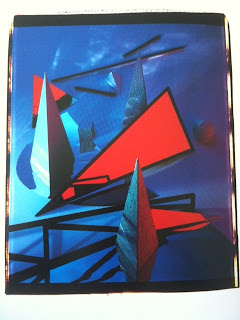 This image is extremely bold and more graphic-design than photographic. It was created using polacolor film. Barbara’s composition is extremely effective in maintaining the viewer’s attention as well as leading the viewer’s eye across the entire image. The triangles, which in this case act more like arrows, point in several different directions, which really helps guide the eyes. Her use of color is amazing. The choice to use such deep and bold primary colors really paid off. The few pops of yellow framing two of the edges is especially lovely. I also love the play with texture and dimension. The shapes range from completely flat and smooth to bold three-dimensional objects with a stucco-like texture. Had it not been for the few objects with texture I would have been convinced this image was computer made. The ripple reflections also add interest to the image, they appear to be made from oscillating water even though there is no water to be seen in the image. The end result is very nice. I love that it is hard to decipher at first whether or not this is an actual photograph…. Personally I am still not entirely convinced. 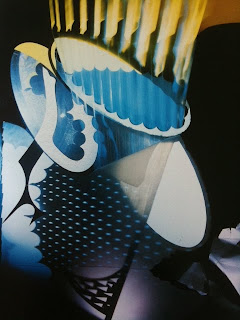 -Plays with pattern and texture

This image reminds me of image 2. Again, it is an extremely bold piece which blurs the line between photography and graphic design. However, I am convinced this is a photograph since I can see where the vellum is folded, which I like. I feel there is an equal amount of positive and negative space, which intermingle and help create the repeating patterns. The ellipses and the scalloped edges play nicely with the bold wavering lines at the top of the image. I also really like the photographer’s choice to keep the warm yellow tone at the top of the image and the cooler blue tone towards the middle/bottom of the image. I also really like how they fade together and mingle in the blurred out wavering lines, which helps emphasize this small section of blur. The harsh lighting is really lovely, but not so harsh as to wipe out all midtones. There is still a nice range but the majority seems to be highlights and shadows. This lighting adds the graphic design feel of the image. The original is a cibachrome print, a color processing technique where the dyes are in the paper itself and are bleached out during the developing process. It would be interesting to see the two side-by-side and how the methods of printing affect the image. 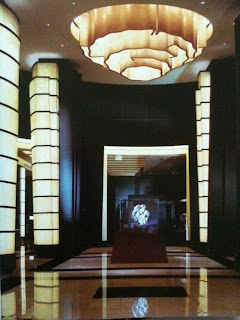 -Basically monochromatic with a few ‘pops’ of blue

This image is also from a lighting book, which again is very apparent based on the technical skill and focus put on the different light sources. Once again you see the artist’s hand in the way he decided to frame the shot. The play with multiple framing adds another interesting element to the image. The sculpture is subtly framed by the lighted entryway to the coffee bar, which is framed by the black tiles, which are framed by the lights and chandelier. It is a great play of light and dark, positive and negative space. He also accents the repetition of shapes in the way that he framed the image. By offsetting the center he emphasizes the rectangular elements constantly reoccurring throughout the space. (The framing he created also emphasizes this.) I also like the way he chose to play with reflections. It is slight enough to add interest without overpowering or making the space appear cluttered or too busy. Another nice touch was the play of warm and cool tones. The image is primarily a warm monochromatic image with a few pops of cool blues here and there. It really adds the welcoming feeling of this space, which I am sure they were going for. 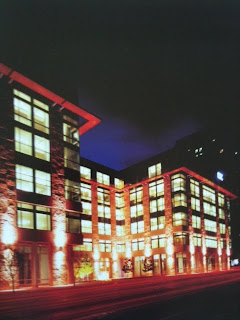 -Bold use of color

Image 5 is a nice example of harsh lighting done correctly. The decision to keep midtones to a minimum I feel adds to the image. Again this was from a lighting book, but the choice to shoot the lighting in this way I feel was partially the artist’s decision. By doing so, it really gets the point across that this lighting is great at illuminating spaces at night, and that they are extremely effective in doing so. Had there been more midtones I feel the overall impression of this lighting would be that they were more muted and not as dramatic or powerful. I also like the way he composed the image, having the building go off in the distance, and creating an interesting shape in the upper right corner in the negative space. Also, the long exposure helped add pops of color to the image, from the deep rich blue in the sky to the red streaks caused by cars driving by. Both these red and blue tones help counter the green fluorescent looking lights coming from within the building, which would have been too much without them. There is quite a bit of negative space, but it doesn’t bother me at all. Again, I think it helps emphasize the lighting, which I am sure they were going for.