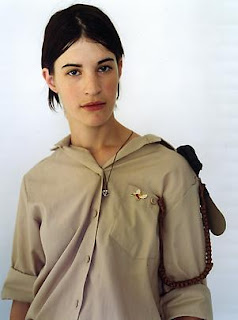 Rineke Dijkstra
Shany - Palhamin Israeli Air Force Base - Palhamin, Israel - October 8,
2002
1.This is a traditional portrait of a young Israeli girl. She
serves in the Israeli Air Force. Her uniform isn't crisp. She wears a necklace and a pin. The background is white.
2. It feels as though this girl revels in her youth. T
he way she wears her uniform, almost lackadaisically, but with finesse and a certain uniqueness, makes me think about her as a free spirit. She is committed to, but unconcerned with the shackles of military and patriotic duty - she is free.
3. This is part of a series of photographs documenting this girl before and after her service in the military. 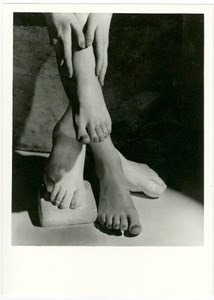 Horst P. Horst - Form Horst - Barefoot Beauty, 1941
1.Black and white photograph of a woman caressing her two feet over a statue of two feet. Up down orientation. Healthy
contrast. Her toes are painted. Studio Lighting
2. There is a heavy emphasis on form. He takes this woman's foot and treats it
in the same way that he does the statue. There are still elements of her individuality, for instance in the way she paints her nails, but it's underplayed. A cascade of form.
3. Horst was known for his photographs of beautiful women and plants. He photographed for vogue and is considered an old master. 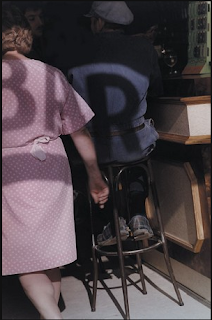 Ralph Gibson - 1971 - 2007 - France Color
1. This is a photograph of two people. They're sitting inside of a building. Natural lighting. The word "BAR" is cast on their backs through a shadow. Color photograph.
2. I was attracted to this photograph and Gibson in general based on the way he treats text. It's all very well integrated. I'm interested in the couple and their culture. The way they're dressed intrigues me. This photograph seems very dependent on happenstance and incident. He shoots in the traditional flâneur style.
3. Ralph Gibson shoots exclusively with the Leica. His images incorporate fragments and surreal juxtaposition. He's known for his on the fly shooting. 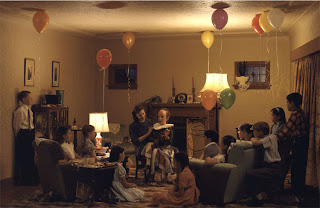 Jeff Wall - A ventriloquist at a birthday party in October 1947 - 1990
1. This is an artificially lit scene of a child's birthday party. In the center of the room there is a ventriloquist. Balloons at different levels of the room.
2. There is an inherent creepiness to this scene. Wall's photography can be described as cinematic. A detail shot of the puppet reveals how disturbing it actually is. The children are transfixed and the two clocks in the room show different times.
3. Wall references Houdon’s Bust of Voltaire in the puppets construction. 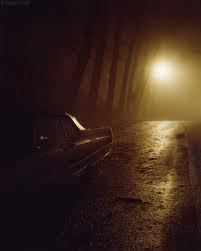 Todd Hito
1. Night photograph. Sepia toned. Stationed car illuminated by an ambiguous light source. Trees in the distance. Up down orientation. Reflective ground. The car is a classic model.
2. There is an eerie sense to this photograph. The lack of narrative detail enhances this.
3. Todd Hito is known for his lush aesthetic.
Posted by gisela at 7:36 AM