Originally the book seemed interesting because the frontal image contrasts so drastically with the image on the back of the book. If you were to turn the book over its almost as if you grabbed a completely different book. The two images juxtaposed change the dialogue of the individual image and allow for the images to create a dialogue in context of each other; the same theme is repeated throughout her work held within. The series Double Takes resonated with me, and one of the diptychs caught my attention the most. 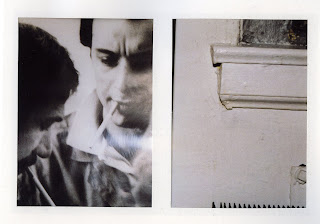 The two images lie next to each other matted together. On the left hand side it is an image of two men smoking cigarettes. Both individuals are glaring at a downward angle, and the men’s focus is beyond the frame leaving the viewer with questions about what is on the other side of the frame. The tone of the image can be assumed as being a serious tone. It seems as if it there is a very still moment, and as the viewer you are privy to private information. There is a strong glare on the right hand side of the image, which makes the image seem two-dimensional. The men seem sinister because of the dark shadows around their eyes, and it can be assumed upon observing the tension in his forehead that the man on the left is concerned. The image is filled with a lot of gray and black space, lending to a feeling of uneasiness.

Countering this image, the image on the right is filled with white space; even so the image suggests a literal darkness due to the light source used. The strong directional light or flash gives the image strong contrast. The feeling of tension is mirrored within both images; the artist choice to exclude a lot of context clues leaves the viewer wondering what is happening beyond the frame. The artist only includes a small section of the window covered up with an item unrecognizable and the viewer is left to guess what the jagged edge is, on the bottom of the image. There is also a sliver of darkness on the left and side, giving the image depth and suggesting a dark setting beyond this location.

Both images allude to the same feeling or same idea but counter each other in terms of subject matter, one image capturing a romanticized moment in time, the other spotlighting the mundane. They both give a feeling of captured private moment or private space and seem almost voyeuristic. The image on the left can be viewed as a segment of what is happening outside the obstructed window or maybe what takes place beyond the black space on the right side of the room. These images evoke similar sensibilities, and seem to suggest an emotional or rather a situational correlation. The artist seems to be dialoguing about the subconscious using a cryptic method.

The title Double Take refers to the way in which the artist chooses to display these images. As the viewer turns the page the mat lifts off the images and the actual image is exposed. 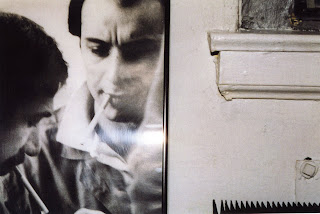 What is displayed is one solitary image, rather than the diptych. The image is revealed as a setting like seen before, but the dark left side is a frame and the two men smoking is a poster within that frame. Looking again at this image under a new context brings up several more questions. Rather than questioning the relationship between the two images, the viewer is left questioning Unterberg’s motives behind deceiving the viewer. What is the image about when you realize it’s just a poster hung within a space? The viewer can assume that the poster was not intentionally placed in that specific space beyond the reasons of it being purely decorative. Through that logic you can infer that this is a study of an individuals private environment.

More importantly the artist is challenging context and distortion of context. Our language and our dialogue rely heavily on the context in which it is conducted, if the context is changed the dialogue changes as well. This also brings up some core issues within the medium of photography, for example what is considered to be true will never be the truth because it in some way it is obscured by our own awareness. In some way our perception destructs the truth and our construction of images includes a subconscious context. I think the artist’s intentions are to illuminate the manufactured way in which we view imagery and challenge the systematic way in which we see images.