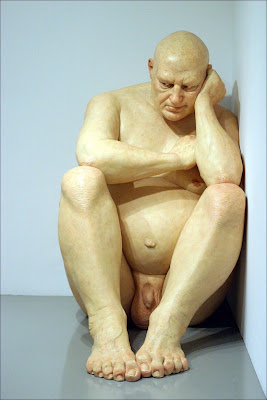 I was originally drawn to this image because of the oddity but in closer examination, I found this image to be melancholic as well as comforting at the same time. His appearance heightens the complexity of this image through the subtlety of tone. The man’s skin tone mimics the cool tone of the background. His complexion appears to be slightly green and gives the viewer a sense that he is unhealthy or unnatural in some form. The green tone also gives the man a waxy appearance. The arrangement of his body gives the viewer a sense of this man’s conditional state. His body creates openness between the subject matter and the viewer, the arrangement of his legs seems relaxed, and the position of his arms seems uninterested. He is seemingly unaffected by his stark setting. Two indicators may suggest that he is uncomfortable; the space in which his body occupies is pressed into a corner, as well as his glare off the frame into an unknown location. He seems contemplative and isolated, and it seems as if he is having an internal dialogue with himself. The viewer seems to domineer over the man and he seems to act as a submissive party. Somehow, this image evokes a feminine attitude. I feel as if this may be a subversion of a woman’s reaction to feeling objectified and pigeonholed into certain roles. Maybe at the other end of the spectrum, it is discussing a disengagement of human interaction. This image seems very cryptic and leaves the viewer with very few clues. hmmm