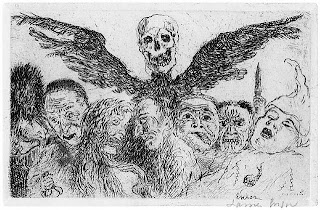 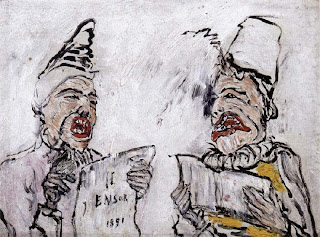 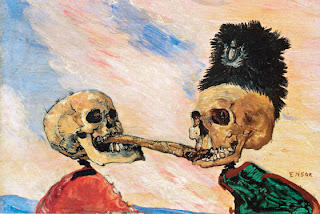 James Ensor was a late 19th early 20th century painter and print maker. His paintings were originally deemed scandalous, yet he continued to exhibit his work and eventually became accepted by the community. He has been a heavy influence on expressionism and surrealism.
His paintings often feature skeletons, which he painted from life. He would set up the skeletons in his studio and dress them up in masks similar to the ones his mother sold for carnivals. He was particularly interested in the masks' forms, colors, and psychological impact which allowed him a true freedom to paint whatever came to mind.
Fun tidbits: in 1929 he was named a Baron by King Albert. He was also the subject of the Belgian composure Flor Alpaerts's "James Ensor Suite."
The last image, titled Christ's Entry Into Brussels, which was exhibited in 1889 was particularly scandalous and caused quite an uproar throughout the community.
---------
His work reminds me of Trenton Doyle Hancock's, or rather the other way around. The line work, distorted figures, and even subject matter (especially the skeletons and mask-like faces) particularly remind me of one another. The first two images, I feel, show the strongest influence or parallels to Trenton's work, with their fast and slightly sloppy sketch-like quality, as well as the decision to add color to only a few key areas.
*All of the facts were retrieved from wikipedia.
Posted by dnfess at 7:05 AM

Email ThisBlogThis!Share to TwitterShare to FacebookShare to Pinterest
Labels: http://3.bp.blogspot.com/-LfWk__Tswpo/Tbl4WRyWXSI/AAAAAAAAADE/7rn6BaElVg4/s320/800px-Christ%2527s_Entry_Into_Brussels_in_1889.jpg