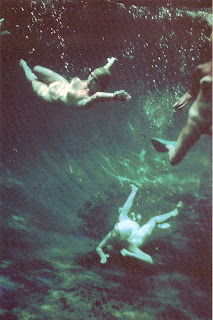 Image #1: Laurie Simmons, Swimming Women, 1980
Source Material: Book: Laurie Simmons: The Music of Regret
Objective Observations:
-Underwater Photograph
-Three nude women swimming
-The women‟s bodies are contorted
-Cool color palette
-Natural lighting
-Fast shutter speed
-One of the women is half way off the frame
-The three women form a “V” shape
How these observations lead to how you interpret the photograph:
The fluidity of movement between the water and the women creates a ballet-like/acrobatic tenor. The  bodies of the women are twisted and contorted in the water with bubbles and reflections of light falling on and around the women, with nothing to ground them. The lack of gravity and unidentifiable space creates an otherworldly setting for the models. The woman on the right, who is half way off the frame, provides the expanse with a sense of endlessness. The playfulness of the movement and the “V” shape the bodies of the women form provide a sense of sensuality for the viewer.
Research:
Jan Howard describes in detail Simmons' intentions with the creation of the Water Ballet series in "Laurie Simmons: The Music of Regret". The series is based off of “the mercilessness of the sea and the bitterness of mistrust between individuals” (Howard, P. 34). The seductive nature of the water is interrupted by the mortality of the swimmers apparent through the air bubbles floating through the water. Simmons began shooting with plastic dolls through the glass of a fish tank then moved into pools with her figurines. She accidentally caught swimmers in the background of one of her shoots and decided to continue the project with real people. The rest of the project was shot using friends for models and in pools or the Caribbean sea. 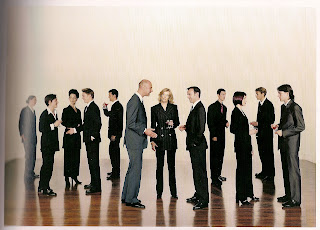 Image #2: Mitra Tabrizian, Beyond the Limits, 2000
Source Material: Book: Street and Studio
Objective Observations:
-Suited men and women
-Standing in a blank space
-Holding cocktails
-Interacting with one another, but not the space around them
-Wood floors
-Off white walls
-Consistent lighting
How these observations lead to how you interpret the photograph:
The individuals in the photograph are in what resembles a bare gallery space interacting with one another, but not the space around them. Tabrizian appears to be making a commentary on the politics of the fine art community often times have nothing to do with the art itself. The people clumped into this area are all wearing dark colored business attire and gripping fancy cocktails. Each person seems to be mimicking the other in an eerily mechanical tenor. There is a falsehood in the sincerity of each persons interest in the other, which gives the group a robotic ambience.
Research:
Mitra Tabrizian is an Iranian artist currently working in London. The series Beyond the Limits is based of the politics involved in the “creative process”. She describes her subjects to have “mutantnt like qualities” and dresses them up in suits because it “suggests nothing and everything at the same time”.
Source: http://www.mitratabrizian.com/_reza.php# 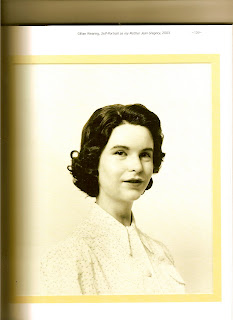 Image # 3: Gillian Wearing, Self-Portrait as my Mother Jean Gregory, 2003
Source Material: Book: Street and Studio
Objective Observations:
-Black and white
-Portrait of a woman
-Vintage clothing
-Vintage hair style
-Soft smile
-Sad gaze
-The title is “Self-Portrait as my Mother Jean Gregory”
How these observations lead to how you interpret the photograph:
Based off of the title alone, perhaps Wearing has placed her own face onto a portrait of her mother in order to establish a connection between her mother and herself. The face in the photograph looks too modern to be an actual vintage print of Wearing's mother. The outlining her of eyes and around the hair line is a little odd. There is a distinctive grey outline between the woman's hair and her skin and the eyes seem to be cut and pasted onto the eerily smooth face in the photograph.
Research:
Gillian Wearing is a U.K. based artist. Self-Portrait as my Mother Jean Gregory is part of a series of family member photographs Wearing exhibited. The family members include her mother, father, brother, and uncle. Upon first glance, each image looks as if it is taken out of a family album, but with further scrutiny you recognize oddly similar features amongst each family member. Each photograph has actually been alter to place pieces of Wearing's face onto her family members faces. She mentions her fascination with the future as a child has now switched to her fascination with the past as an adult. Source:http://www.guardian.co.uk/artanddesign/2006/jul/06/art 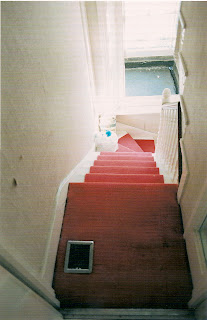 Image # 4: Wolfgang Tillmans, Space One, 2001
Source Material: Book: Wolfgang Tillmans
Objective Observations:
-Downward Perspective
-Natural Light
-Winding staircase
-Red carpet
-One space leading to another
-Immense amount of lines pointing downward
-Vent on the left corner of the top of the stair case breaks the solid red space
-Warm color pallette
How these observations lead to how you interpret the photograph:
This is the area between a living space and the outside world. It is the staircase leading toward civilization and away from solitude. The bright light is diffused by a set of blinds or white curtain, spreading the light generously, where the stair case winds around to another level of the building. This diffused light gives the bottom of the staircase an etherial essence, as if a higher power is beckoning the viewer from the lonely, dark solitude of the apartment into the warm and inhabited outdoors.
Research:
This photograph is from a body of work entitled “New Family”, which lacks any real family but rather embodies the “familiar”. “The images appear to be half way between the world and the photographer” (Wigley, P. 150). This quote deems to be the epitome of Tillmans„ theme of an outsider looking in and an insider looking out that this particular series seems to manifest. Finding anything more substantial from this particular series becomes a test of true patience because Tillman expresses his dislike of giving the viewer too much information about his work. “Writing about photographs is a risk. The first sign of a good photograph is that it makes you want to say something about it. The second sign is that it makes whatever you say seem inadequate. The best photographs entice commentary then demean it, stimulating reaction and then cutting it off, producing noise only to extinguish it” (Wigley, P. 147). 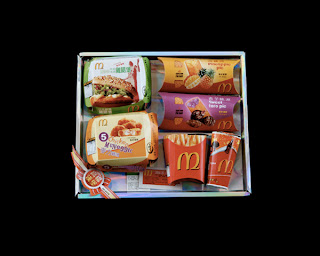 Image # 5: Kurt Tong, In Case It Rains In Heaven
Source Material: Internet: http://www.kurttong.co.uk/#/Projects/In%20Case%20it%20Rains%20in%20Heav en/1
Objective Observations:
-Paper McDonald's meal tray
-Chinese writing on boxes and tray
-Over saturated color palette against stark black background
-The meal tray is perfectly centered
How these observations lead to how you interpret the photograph:
The fact that the McDonald's tray is paper and their is Chinese writing on the boxes and tray would suggest that these are hand made, decorative Chinese ornamentation. The black background gives the object a much more ominous tone than a white background would. The meal tray being perfectly centered, gives it presence and importance.
Research:
Kurt Tong was born in Hong Kong, but is now working out of London. The “In Case It Rains In Heave” series is about a traditional Chinese ceremony, in which family members purchase paper replicas of worldly possessions and burn them in order to pass them on to their deceased family members. The paper replicas are often very detailed and range from anything from microwaves to cell phones.
Posted by Vanessa at 6:45 AM