Big Gun by Me Company 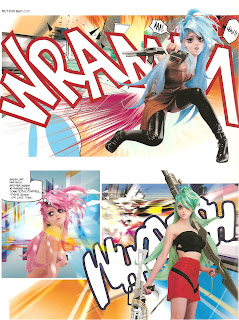 Because of the subject matter, this image jumped out at me almost instantly.  Anime and manga, or Japanese animation and comics is till really popular to me and a lot of people in my generation.  I found these set of images hilarious in its way of mocking the art style in an extremely flamboyant manner.  Me Company, used computer programs such as photoshop in order to mix photography and drawing to collage them into this piece.  First, there's the extremely vivid and bright almost head aching neon color schemes.  Then it is laid out in comic book format however the panels don't really have anything to do with each other and does not really tell a fluid narrative.  Two large panels with mind blowing action lines and large action words do not form a narrative and mock the comic book format.  Also, that small panel in the middle left, switches from being action based to serious dramatic with the girl contemplating her existence (This happens quite a bit in manga and anime).   But the most important and stuck out feature of the image is the girl.  Jesus Christ she's creepy as hell, those LARGE anime style eyes do not work in real life.  Even her hair off color and seems to defy gravity.  These are traits many Japanese comic artists use to design their characters with.  This way of character design evolved from the early 21st century Disney and American cartoon characters that tend to use large eyes and exaggerated features.  One perfect example is Betty Boop who is supposed to be played off as sexy but her eyes and lips do not look anything human.  This character tends to contradict her personality by being played off as extremely feminine through her sad facial expressions, fashion, and slender body type.  However, at the same time happens to live a life of combat by wielding heavy firearms.  Her face in the first panel seems to mock this paradox by looking like she's forcing her action pose.  It's two fetishes fused together into one neat package for guys to drool on; a trait the anime industry loves to use constantly.  Still, this is my favorite piece I've seen so far. 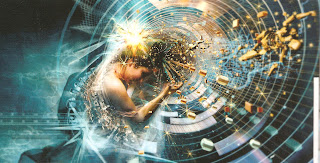 This image uses mixes the human body and fuses it's organic nature within the digital and computer realm of cyberspace.  The girl stands out because her organic nature stands out withing the cold and patterned environment.  First of all, she automatically registers as a human being because the color of her skin tone, hair, and human body parts are still kept relatively intact and recognizable.  Then, there's the cyberspace, born from her head, patterns using cold blue colors and rigid right angle shapes contrast the human body.  It is also broken up by the gold pieces scattered throughout.  Two contrasting colors conflict, the warm lifelike colors of the human body with the cold dead colors of cyberspace.  I read that it shows hows people interaction with technology and how they are basically so dependent they combine with it.
With the advent Photoshop and digital art computer programs are tools that breaks many technical limitations to creating visual artwork.  Instead of having to settle with straight photography or hand crafted collages, artists can create more imaginative visual imagery by putting together hand drawn images and various other photos and textures to create whatever they want.  No dangerous exacto knives or messy glue needed.  Colors, tone, and blend can be changed instantly and none of it is permanent.  This fluidity of work flow is why many artists love using computers in their artwork. 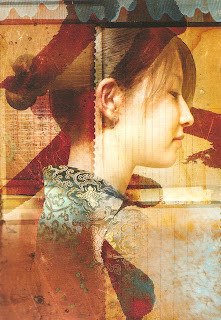 
This portrait of a Japanese woman was photo manipulated to incorporate textures and colors from old diary pages and Japanese writing.  The elements are arranged in a graphical manner to serve the composition.  This gives the portrait a more dated look and even though this is digital work, it removes the model from the current time line and puts her in the past.  Not only that, the portrait is transparent even almost ghostly.  Her fashion adds to this ghostly effect by being traditional clothing.  Her green collar pops out of the warm color scheme.  This ghostly effect supplements the wear and tear of the diary pages belong her and seems to tell a narrative.  She becomes more related to the papers behind her because of her ghostly appearance like.  She's more like a fading memory than a person.
The artist combined texture, atmospheric, colors and collage to create a narrative set in the past.  Her use of imagination through digital imagery makes it easier to represent what is going on inside her head.  "A fantastic world where creation between pure thought and the physical result."-Catherine Mcintyre. 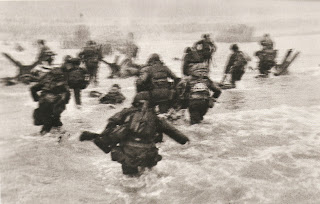 -Objective Observation
D-Day
Combat
Shaky and Out of Focus
Historical Significance
Still well composed and exposed photograph even if being shot at
Rarity
Soldiers are struggling to survive.

I love the drama and action captured through war photography.  Robert Capa is famous for his capture of the Western Front of World War 2.  This photo in particular was taken on the 2nd beach assault on Normandy during D-Day of the war.  Most of it seem blurred and mainly out of focus.  However, nobody can capture such as brilliantly composed and well exposed photo in the midst of heavy machine gun fire on the battlefield.  You can follow a trail of leading lines from each soldier as they run in mass towards the horizon. The dark uniforms of the soldiers make them stand out from the background.  There is something happening in each plane. There is a beautiful curve that leads from the man in front and center towards the right.  There are many things to look for in this photo and many people to analyze their actions.  Very rare you see a photographer run into combat without protection even now.  This man ran into the thick of combat for his passion.  So the shaky cam and out of focus photo is excusable.  In addition, D-Day photographs are extremely rare and many are censored or destroyed by the US Army for propaganda purposes. 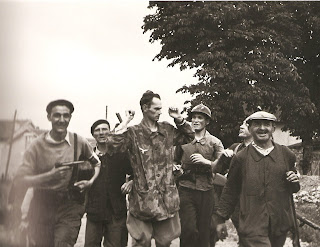 
Liked this picture because I saw it ripped off in one of my favorite videogames.

There's a whole cast of characters here smiling over the capture of a German soldier.  The Soldier is the subject of the photo but the guy in the left with the pistol pointed at him comes out at me.  I look at the faces of all these men and wonder what they are thinking.  There is a certain energy that Robert Capa captured here through this interaction.  There are two things happening that brings this photo alive, the man with the pistol, and the German soldier who is surprised because the militia man behind him is poking at him with a knife.  Through the militia, I get a sense of relief and satisfaction of having their city liberated.  The nervous soldier seems to be like a prize catch for them and they take joy in harassing him after what he has done to their people.  The man in left looks like he's enjoying it the most out of everyone.  Smiling while holding someone at gun point gives a sense of satisfaction through conquest.  War has many stories to tell other than combat the civilian lives and how they are effected are just as important that who leads what battle where.  Many people's lives change drastically through conflict producing drama that deserves to be documented.
Posted by Junior Journal, Part Too at 6:53 AM