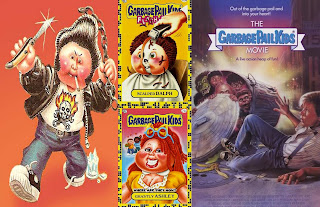 Produced by the Topps Trading Company, originally released in 1985 and designed to parody the Cabbage Patch Kids dolls created by Xavier Roberts and was originally created by Art Spiegelman and Topps executives under the original name wacky packages later changed.

with all the popularity of the cards they were always shrouded in controversy they were banned in schools and they were being sued for copy right infringement by the makers of Cabbage Patch Kids.