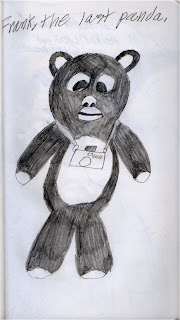 It's that he purports himself to be a rare breed: the guy who does commercial AND fine art! Except his fine art isn't that good, nor is it particularly deep or conceptual. No matter how many times he claims to be an artiste making brilliant works whilst finding ways to insert some sort of subversiveness into his work for The Man, saying that your work is deep is conceptual doesn't make it so.

I admit that my own work is not exceedingly deep and a lot of it is pretty damn ridiculous. If I can own up to that and embrace my own goofiness, why can't he admit that he's making art for my mom, and embrace his blandness?

I think Os described it best when he described Frank as the last panda, because that's exactly what Frank wants to be. Silly man.
Posted by gisela at 2:59 AM