Paolo’s Semester Experience Blog (This is the journal assignment)


It’s nearing the end of the semester and I need to reflect over what I have experienced and taken in so far.  Although this is the second semester in the block program I honestly feel that I still need to improve on my work ethic.  Procrastination and motivation has been my largest flaws as a student here and I wish I could have done a lot more in my project.  But staying here is not a complete waste because I was able to learn many things from awesome professors that are unmatched in any other department.
First thing to get out of the way are the five field trips us juniors followed Mr. Politzer to.  In no particular order, number one there was the first trip to Frank White’s Studio in Diverse Works.  One of the two most art relevant trips this semester.  The lesson that was stressed in the trip was the workings of an artist in the public industry and in the Fine Arts world.  It was interesting to learn the technical aspects with dealing with clients, galleries, and the advertising industry.  In addition to that, specific tips on how to show your work to the world.  However, I rarely learned anything conceptual from him.  His concepts and meaning behind his works are relatively simple asides from his god like photo technical skills.  Anything ran over by a fork lift did not really go by me to well.  So imagine how I felt when I had to sit there and wait as he performed his “Lord of the Rings Return of the King” ending scene.  It took him forever to finish showing work I rarely found interest in.  Don’t get me wrong I like his work but it’s just not my style bro.
The second art relevant trip was Trenton Doyle Hancock’s studio.  Google map freaking lied to me so I spent one hour looking for this damn place.   I came late so I probably missed many important things.  Though his studio looks like a tornado went through it as compared to the clean, orderly studio of Frank White, I learned more things I found interesting from this guy than Frank White.  He kind of looked like what my dad would look like if he were black.  But I loved the way this man thinks.  His strange and bizarre paintings come straight from his mind.  Bizarre and frightening characters both captivate me.  Another reason I feel inspired by this man is because I create my artwork the same way he does.  I love to jump into imaginary worlds and become a creator.  That joy I feel in playing god and birthing universes; a task that no other organism on earth can duplicate.   He worked similarly making his imagination run amok.   I learned how to get inspired by the things around you and to take in concepts and issues and express it in your own.  All that junk in that studio was actually useful and not forgotten all of them had a role to play.   I loved his work I get a better learning experience by listening about concepts and ideas than technical aspects.  Oh also, when he said he was an otaku, I wanted to Bro Fist him.

Reliant Photos
http://www.facebook.com/media/set/?set=a.841798447376.2411261.37527355
The rest of the field trips were non-art related but another role of a photographer is also to explore and capture many other things around them even those not related to art.  Reliant stadium was the first of these we visited.  This was my first back stage experience I have had in such a large public facility.  I got a thrill in exploring areas that most people do not see.  It’s like work but not as fun.  There were so many things the public take for granted that I did not know about.  How many people it takes to create our entertainment.  It felt like we were treading holy ground by going into the players’ locker room, stadium areas and VIP party rooms.  Also, monster trucks are awesome.  One thing I was glad to see was the bar my father designed for the first time.  It’s almost surreal because I only saw it in photos and in the carpet samples I use as a doormat in my house.  Over all it was a learning experience that was epic.  The history and areas I learned and explored were cool.
Next was my class’ least favorite trip to the water treatment plant (which as euphemism for sewage facility).  At first I thought the tour wasn’t that bad but as we got deeper in the shit, literally, some of us almost puked and cried.  It’s a disgusting and sometimes scary place.  The unholy marriage between sewage and the pounding and roaring sounds of heavy machinery is probably the least likely place to find artists (many but not all) looking for beauty.  The smell was not the poop smell I expected but something just as worse.  The stench of purifying chemicals and bleach are strong enough to give headaches.  Also, some pipes leaked water and if you got some on you, you become paranoid as hell.  Then there was the filter area with the wrappers and used condoms getting stuck in there, which was an unhappy sight.  The learning experience of another public facility was great and educational, just physically disgusting. 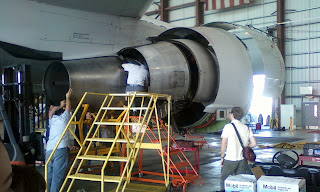 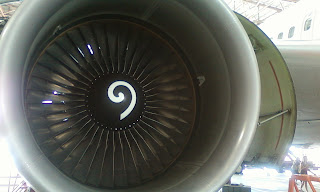 Last of the non-art related fieldtrip was to Bush International Airport.  A place I am not unfamiliar with at all.  I have to pick up my mom from there almost every month.  But the coolest thing was I get to see AIRPLANES!  Though I hated the machinery in Poop Town USA, the aesthetic of mechanical designs and of military and modern equipment has always fascinated me since childhood.  All the other places to me were insignificant until I get to see the guts of an aircraft.  I loved how things work together and function into one unit.  I get lost in all the detail and small nooks and crannies of the engines, the computers of the aircraft and everything.  It’s so chaotic but all play a part in such a beautiful machine.   My mind goes into this state of endless wondering.  It’s a feeling I can’t describe.  Sitting in the cockpit was exhilarating.  I imagined I was an Air Force pilot on a mission in Afghanistan.   Watching the planes take off was amazing, such large behemoths taking to the skies.  Most of us take how much we’ve come along in technology for granted.  It has become part of us.  For example, I know the Internet was around after I was born but I don’t remember the first time it came into my life.   It felt like it has been there forever.
These field trips enriched me as an art student.  A conclusion I came to recently be that my job as an artist is to explore and take in the world and express our perception of it.  Many people believe we should find ourselves by separating ourselves from being products of society.  I disagree because humans are creatures that build up their character by using their life experiences as building blocks.  We are not like animals that know how to do things the moment they are born; we have the gift to learn and to pick and choose what we want to take on to ourselves.  There is no primitive “true self” devoid of our surroundings.   The source of our soul is not inside, but out there in the world.  The artist expresses their perception of the universe from the collage they had made from bits and pieces from the outside.  I want to explore, I want to add more to my sculpture of the self.  Then show it off to the world.
Posted by Paolo Aninag at 12:23 AM