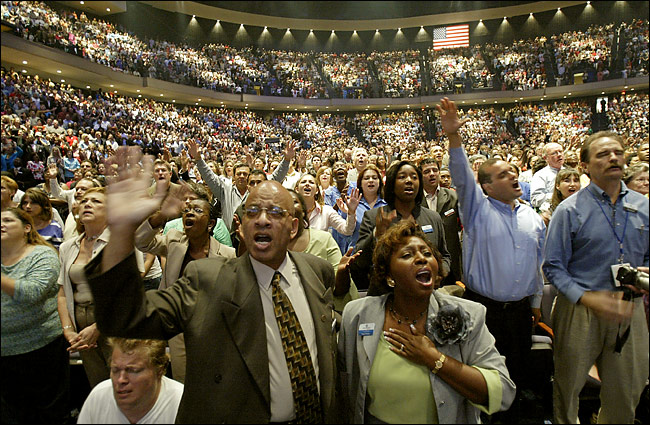 
Living in the States Gospel Music it is almost impossible to not at least hear it once in our lifetimes especially in a southern state like Texas.  Gospel Music is a form of music that express personal, spiritual, or communal belief in Christian life.  It relies very heavy on vocals and a recurrent theme is about praising, worshiping, and giving thanks to God and Jesus Christ.  Modern Gospel music can be found using various music genres from rock to rap to country.
The first known recorded Christian music can be traced back to the early Christians who were encouraged to sing their prayers in order to feel and express their religious connection with God.  Medieval monks chanted Gregorian Hymns during rituals.  However, common style of Gospel Music we know in particular is an 18th century American creation which comes from oral tradition and uses a great deal of repetition.  This role of repetition were created by illiterate African Americans who were not allowed to read.  Early slaves were required to attend the worship services held by their white masters.  Not only that the masters can look over their slaves during services but it is also enforces slave indoctrination.  Many readings of St. Paul teaches good servants to be obeying, loving, and trustful of their masters.  Early on, the songs barely had any musical instruments to assist them so most were done in a capella.
Modern gospel music has its roots in the Mass Revival movement and the Holy Pentecostal Movement of the 1870s.  There were mass evangelist revivals happening in numerous cities and in the process musical talents also get swept up in the fray.  Many musicians having been religiously revived have a new batch of emotions and feelings to express.  The Pentecostal movement also appealed to people who are not attuned to sophisticated church music and attendees bring in any musical instruments they can find.  This merges many styles of music even those of African roots.  Many fathers of Rock and Roll like Elvis Presley and Jerry Lee Lewis got their inspiration from being brought up from a Pentecostal environment.
After the advent of Radio, the audience of gospel music multiplied ten fold and became a booming industry creating competing gospel music companies which continue to make music to this day.  Today, you can find Gospel Music outside the church and in your Best Buy, Target, and now iTunes.
Now, Gospel Music can be broken down in to several sub-genres:
Urban Contemporary Gospel
Gospel Blues
Southern Gospel
Progressive Southern Gospel
Christian Country Gospel
Bluegrass Gospel
Celtic Gospel

Till next time may God bless you all.