Guston was a print maker and well known painter for his abstract OR NEO-ABSTRACT paintings. He is considered to be the first person to be a neo-abstract artist because he was the person who shaped the name and began creating cartoon like abstract pantings which was new to the abstract world.
-Phillip Guston was born in 1913 in Montreal Canada, Guston moved with his family to Los Angeles as a child.

-in 1927 he enrolled in the Los Angeles Manual Arts High School, where both he and Jackson Pollock studied under Frederick John de St. Vrain Schwankovsky and were introduced to Modern european art, orieantal philosophy, Theosophy and Mystic literature.

-As an 18 year old, politically-aware painter, Guston made an indoor mural in L.A. depicting the Scottsboro Boys. This mural was defaced by local police officers, which impacted Guston's political and social outlook. Guston, as Philip Goldstein, along with Reuben Kadish, completed a significant mural in 1935 at City of Hope, at the time a tuberculosis hospital located in Duarte, California, that remains to this day. 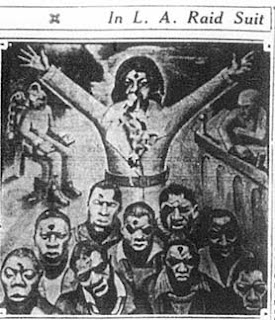 -In the 1950s, Guston achieved success and renown as a first-generation Abstract Expressionist. During this period his paintings often consisted of blocks and masses of gestural strokes and marks of color floating within the picture plane. These works, with marks often grouped toward the center of the compositions, recall the "plus and minus" compositions by Piet Mondrian or the late Nymphea canvases by Monet. Guston used a relatively limited palette favoring whites, blacks, greys and reds in these works. This palette remains evident in his later work.

-Guston is best known for these late existential and lugubrious paintings, which at the time of his death had reached a wide audience, and found great popular acceptance. 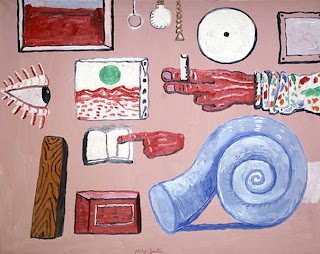 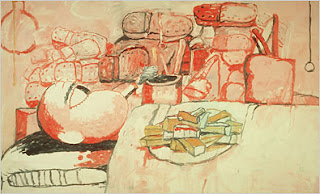 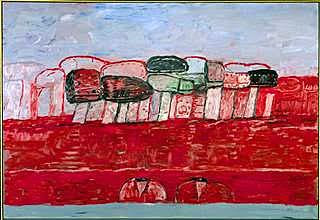 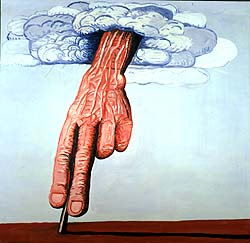 (Information Pulled From Wikipedia @ http://en.wikipedia.org/wiki/Philip_Guston)
Posted by Brit at 10:17 AM