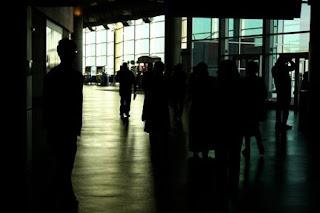 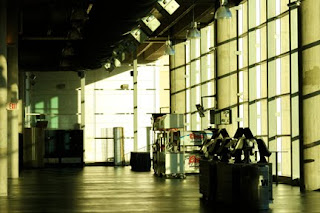 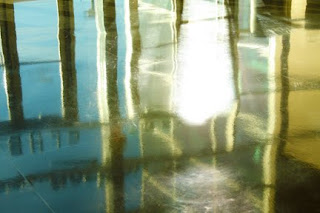 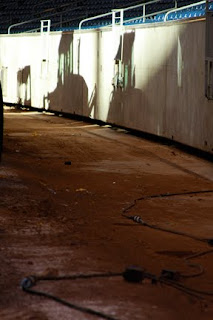 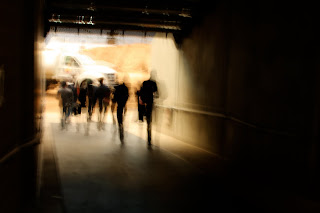 Frank White Studio:
It was really awesome seeing someone on the commercial end of photography and how their studio looked. I really enjoyed that. At the same time, I wish he would have gone into more detail on his photographic process rather than keeping it a secret. I get the feeling it's going to be extremely difficult to break into the commercial world and become successful, it would have been nice to get a few pointers from someone who knows the industry. On the bright side, our visit made me even more determined to find an internship! I am still looking and waiting to hear back from a few people (who hopefully aren't creepers like the last guy) but I am confident I will find one before the end of summer!!!
Reliant Stadium:
This one was probably my favorite out of all of our field trips! It was so exciting to see the locker rooms, the gym, and how the stadium looks from the field. Also seeing the press box was AMAZING! I am now a firm believer that's the only way to watch sports! I got a lot of really interesting shots from that field trip (which is why I decided to post them) and I don't know- it was just an awesome experience I won't forget!
Water Treatment Plant:
Disgusting- yes! Fascinating- yes! I had a lot of fun on this trip as well! I mean, how many people can say they have been to shit town USA?!! (Pardon my french!) I never realized just how many steps there were involved in making our water clean; and that was just for the bayou water! There are twice as many steps for purifying our drinking water! The lighting in some of the areas we went was really cool and gave me some ideas for possible future projects. (No they are not poo related!) It might be cool to go to different places that aren't necessarily 'high-end' but to photograph them as though they were. I don't mean urban decay- I've been there and done that as I am sure most photographers have, but like machine shops, processing plants, things of that nature. It might be fun to capture them in the same technical manner as a five star hotel would be captured- it also may fail horribly. Either way I think it'll be a fun little mini-project for me to play around with over the summer. I'd also like to go out into the country and try to photograph barns and ranches like that as well- I know that's fairly common and has definitely been done before but I still love images like that. I'd also really really like to go up towards the midwest and get some amazing storm pictures! I have always loved storms and like trying to capture them- this seems like a good year to really explore that. (That project might have to wait until the spring though when things are really active and unpredictable.) But I got all of these ideas from this field trip, which is crazy since they really don't relate to water treatment at all. I think it was the combination of the drizzly weather, and just the grey-green overcasts and dim lighting that started it all, not to mention the interesting textures.
Airport:
I know I keep saying this but I really enjoyed our trip to the airport! It really made me want to travel and go somewhere exciting this summer and take tons of pictures! Seeing the flight control was really cool- I was really surprised how small our airport is! It feels so much bigger inside than it did on the outside, which should be obvious but still caught me off-guard. It was also really cool being out there on the runway- that was really really awesome! I have ALWAYS wanted to do that and I am really glad we were given that opportunity!
Rodeo:
So I went to the rodeo to see both Lady A and Jason Aldean- and it reminded me of our trip to reliant! I decided that the rodeo (and motocross) were the two exceptions to my new rule that sports are much better when viewed from the press box! I love all the events- especially bull riding, bareback, and the one where they jump off the horse to rope the calf! I don't think those events would be nearly as cool in the press box as they are up close and personal. These feelings were strengthened when we went out to Tomball to watch a friend's cousin do her barrel race at a local rodeo. I don't know why I felt this was relevant but I thought it was random that I was thinking about school while I was at the rodeo!
Creative Camera Quote:
The quote made me think of some of the issues brought up during critique. As photographers, just like with other artists, it is important for us to be aware of any associations certain colors, words, or shapes have. I know that during one of the critiques the feminine aspects of the triangle were discussed, as well as masonic symbolism. It is so easy to slip up and use something without knowing the background or history, and it can completely alter the message being portrayed. This can be extremely frustrating and is a good thing to know and get used to before we graduate and start our careers as photographers and/or artists.
Posted by dnfess at 10:51 AM